Southern Silky Oak  the name says it all

Southern Silky Oak (Grevillea robusta) is probably more widely grown on more African than Australian farms. Introduced along with other Australian tree species for soil conservation, fuelwood production and shade, I have seen Silky Oak growing well throughout the Kenya in both the high and medium rainfall areas. Local farmers were attracted by its ease of propagation and lack of competition with food crops. It is now commonly used to shade coffee and tea plantations and as a boundary tree to mark out farm plots. Although Kenyan farmers used the wood for rough building and fuel, it was not until native forest logging bans were recently introduced by the Kenyan government that its potential as a high quality timber species was fully appreciated. 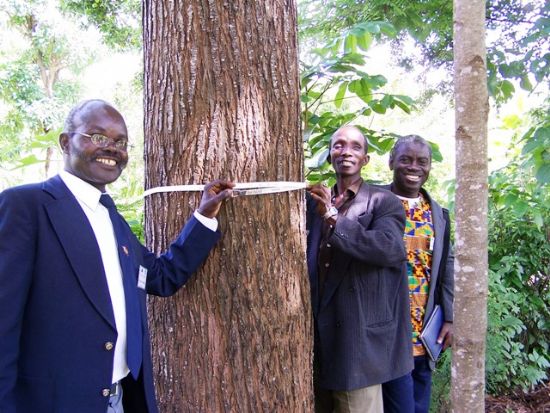 Back in Australia, Silky Oak has been widely grown as an ornamental tree for almost 100 years. From these plantings we know that the species is very drought tolerant, grows on a wide range of soil types, has a tough bark (making it suitable as a shade tree), produces flowers and gum that support native wildlife and can grow large enough for milling within a reasonable time.

The common name reflects the silky texture of freshly split wood and the prominent ray cells that resemble those found in English Oak. The non-durable, yet attractive wood was traditionally used for furniture, particularly table tops, and can be seen in a lot of antique furniture. But you cant easily buy Silky Oak timber today. This is because of its very limited natural range as a dry rainforest species in Northern New South Wales and South-East Queensland where native stands were cut over very early.

Based on early utilisation, Silky Oak has established a reputation as a quality furniture timber. This suggests that producers would have little trouble selling sawn timber for prices much higher than most eucalypt species. For timber production the aim is to grow a straight bole of at least 50cm in diameter and free of branches. Growth rates are reasonable suggesting that sawlogs could be grown in about 30 years on most farm sites.

On the negative side, Silky Oak is prone to wind damage, severe frosts and has chemicals in the leaves and the wood that can cause allergic reactions in some people. I recently felled and milled a log in a friends backyard in Melbourne using the Logosol Timberjigon my chainsaw. I was able to handle the leaf material and freshly sawn timber without any reaction whereas my friend came out with sores all over his arms and chest just from cleaning up the mess. The timber was beautiful but unfortunately he wont be able to use any of it himself. I have since dried the timber and used it as a feature in a bed I made for my son.

Milling a Silky Oak in a backyard in Melbourne using the Logosol Timberjigon the 044 chain saw.

Silky Oak can be easily grown from seed. It will need protection from stock and pests while it is young and requires both corrective and stem pruning to achieve a clean straight trunk. My approach is to prune any branch on the stem that is greater than 2cm in diameter up to the point of my anticipated log length (about 6 metres). I then follow-up by pruning all branches on the stem below a point where the diameter is 8cm. This combination ensures that the tree grows a single straight stem with knots confined to the central core leaving clean, high value knot free timber on trunk.

I prune during the winter every year until I have achieved a clear bole of at least 5 metres. Any individual tree that will not make the grade is culled. Silky Oak has a propensity to produce epicormic shoots on the pruned stem. These are new branches that emerge from the trunk in response to the reduced area of canopy after pruning. I remove these in the next winter with a pole saw. 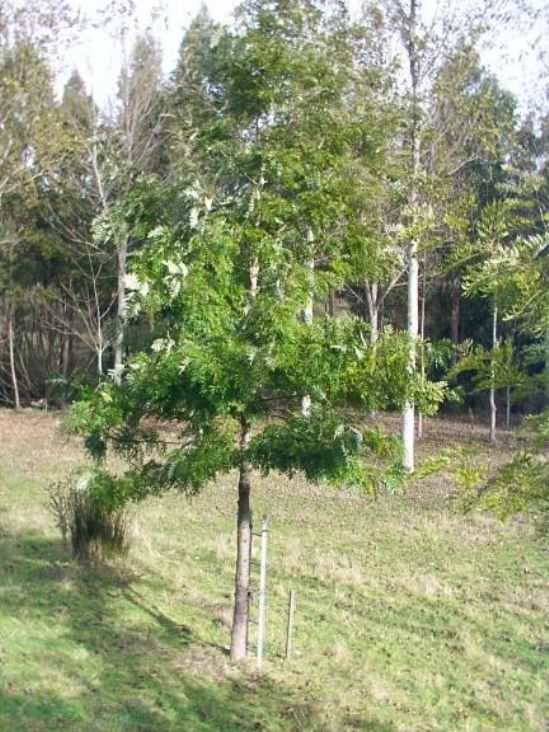 Before and after an annual pruning lift of a young Silky Oak at Bambra. I prune any branch over 2cm in diameter then all branches below the point where the stem is 8cm in diameter METHOD.

To grow large diameter trees each individual will need plenty of growing space. This can be achieved by growing a single row at a spacing of about 4m between pruned trees. In a plantation I would suggest a final stocking of about 150 trees per hectare or an average spacing of 8-9m. It is important to plant more than this to ensure that the trees are well sheltered when they are young and to provide a selection ratio so that poorer trees can be thinned. An initial stocking of around 600 stems per hectare (or 4 metres between trees) seems reasonable on sheltered sites. On exposed sites it may be worth mixing in some fast growing wattle to shelter the Silky Oak from the wind.

Many readers will have access to mature trees and may be interested in processing these. Silky Oak can be milled with very simply equipment and is easily air dried. It is important to take care when milling farm timbers because there is a risk of nails, wire and other material being embedded in the trunk. Some millers use a metal detector to reduce the risk of damaging their equipment. I used a chain-sawn mill and cut wide boards. Please also watch for any skin reactions.

The freshly sawn timber should be stacked evenly with stickers placed every 30 - 40 cm between each board to encourage even drying. To show off the grain a mix of quatersawn and backsawn boards are preferred. Some cabinet makers like to use the speckled backsawn boards to contrast the striking grain of the quatersawn boards. Silky Oak heartwood is pink in colour and moderately durable (not in ground). The sapwood is susceptible to Lyctusborer so it will require treatment (Boron or equivalent) if the timber is to be sold in New South Wales or Queensland.

A closely related desert species called Silver Oak or Beefwood (Grevillea parallela) doesnt grow as large but has a darker timber that is prized by wood turners. The commonly named Northern Silky Oak (Cardwellia sublimis) which is found in far north Queensland is from the same family (Proteaceae) but is not a Grevillea. This species was once widely milled from native forest and can be seen in window frames, doors and lining in old Queensland timber houses.

Look around your area. If Southern Silky Oak is growing well as a street tree or in gardens it might be worth considering as a specialty timber species for your farm. At least you can enjoy the shade and the bright orange flowers while you wait for the timber.