Reviewed by Rowan Reid
Does the future lie in electronic pruning shears? 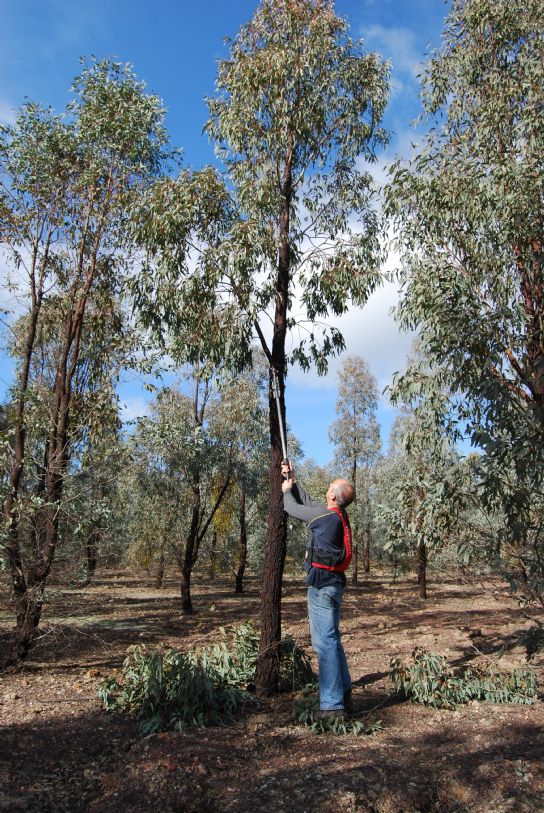 As most of you know: I'm a resolute 'hand-tool pruner'. I've always argued that, if you pruning on time, long handled loppers and folding saw is all you need. However, in recent years, as I get older I have been adding that I can only keep it up for a couple of hours before my arms start to give way.

So, when I was faced with a 12ha plantation of nine-year-old Red Ironbark that had never seen any sort of pruning tool I was happy to accept an offer to try out the French-made Electrocoup electronc pruning shears and a prototype electronic saw. After 6 hours I was converted: electric pruning shears made life easier. However, I still believe you can't leave the loppers and pruning saw in the shed and price is clearly an issue.

For the purpose of testing the equipment I was given the standard Elecrocoup F3010 which includes a handpiece, with secateurs capable of a 40mm cut, and a harness with built-in battery pack. The head of the standard unit can be changed I was also provided with a second unit with the larger 'medium' kit fitted that increases the cutting capacity to 45mm. Both units can be fitted onto a pole and had the 1.2m length.

Although the growth of the Red Ironbark was reasonably good there were a lot of large double leaders that could have been easily removed had the trees been form-pruned a few years ago. I took the following approach to getting the stand back in order: First I selected a tree with good form. If the double leader was close to the ground it could be removed with a chainsaw without impacting on future timber potential. Using the medium kit I pruned all the branches that the unit could handle that were in reach. I even used the pruners whilst up the ladder with some success. I then cut off the larger branches using the prototype saw. Having put all this work into one tree I then ignored the adjacent trees (which will need to be thinned) and pruned the next reasonable straight tree down the row.

I worked for about 5 hours straight without a break. The pruners performed well and appear very robust. The LCD battery level display didn't drop at all during the day suggesting that they will certainly outlast me. If needed they could be recharged during a lunch break anyway. The pruners do have their limits so a folding hand saw is still required. It is possible to 'work' through a large branch using a number of cuts but it might be quicker and easier to just use the hand saw. I really liked using the pruners when fitted onto the 1.2m pole as it allowed me to reach the very low branches without bending over. Although a little tricky I was able to use the pole whilst up the ladder.

Electronic pruning is easier. The catch is the price. I've taken the plunge and purchased the following: The basic unit (handpiece, battery harness, charge etc). The medium kit, which is probably required for most timber pruning. Both the 1.2m fixed length pole and a 3.6m telescopic pole that allows me to reach to around 5.5m. I also purchased a set of gloves with steel fingers to protect my left hand. If using the handpiece without the pole the risk of cutting off a finger on your other hand is real.