A tree for all reasons

There is an old book in the Melbourne University Botany library from 1919 written by the Richard T. Baker titled The hardwoods of Australia and their economics. Baker held the position of 'economic botanist' with the New South Wales Government and was responsible for researching the economic potential of the hundreds of native species up and down the east coast of Australia. It is the sort of information we have lost as a result of the 'industrial forestry age'.

Baker begins his section of Casuarinas with the note that: Shee Oaks (Not Sheoaks or She-oak) were so named on account of the peculiar sound produced by wind when passing through the branches. The term 'oak' comes from the wood. The European oaks have prominent medullary rays that give the striking pattern on quartersawn boards. It is that characteristic that led to many species in the 'new world' to be given oak names like Silky Oak and Sheoak. Sheoak timber came to be highly regarded for singles, panelling, furniture and bakers' fuel.

Baker has a short description of River Sheoak. It is the palest of all the Casuarinas, requires careful seasoning, is beautifully figured, rays are particularly large, heartwood is pale chocolate in colour and the outer portion almost white. The sapwood of all the Casuarinas is not Lyctussusceptible so does not need treating. Lyctusis the powder post borer, a beetle that lays eggs in the sapwood of hardwood species. Susceptible species must be treated with boron otherwise there is forever a risk of the starch laden sapwood being eaten away by insect larva.

River Sheoak has a reputation for exhibiting high growth stresses but I believe that these are induced by management (or lack of it). River Sheoak is mostly seen growing in dense stands along watercourses in New South Wales where it is a protected species. The trees lean away from each other towards the light and this is likely to result in tension wood formation in the trunk. Leaning hardwood trees are difficult to mill because the tree lays down wood that is in tension on the back of the lean in order to hold the tree up. The same wood is formed on the topside of a horizontal branch. As soon as the log is cut the tension is released resulting in warping of the boards. If this is the cause of River Sheoak's poor reputation then we can overcome the problem by pruning and spacing the trees and ensuring that they grow straight.

A few years back I milled up one of our 18 year old River Sheoaks (left) and produced clean, coloured timber with a beautiful figure. Despite being slow to start and susceptible to browsing River Sheoak is a wonderful tree to grow on farms. It is the tallest of the Casuarinas, with excellent form and light branching making pruning very easy - even fun. It is an ideal species for use along water courses for soil conservation. It even fixes nitrogen in a symbiotic relationship with Frankiabacterium. This allows it to grow on very poor sandy soils. In fact, it grows well in most soils except heavy water-logged clays.

There are other Casuarinas that are been grown in multipurpose farm forests for timber. In Western Australia the locally native Casuarina obesa(WA Swamp Sheoak) and Allocasuarina huegeliana (Rock Sheoak) both produce beautiful timber. In the tropics, Allocasuarina torulosa (Forest Oak) is the best choice. The Eastern Swamp Sheoak (Casuarina glauca) is an option, but its propensity to sucker worries me a little. I'm sticking with River Sheoak and have planted many more since I cut my first with greater confidence that this is species small growers should carefully consider planting, pruning and harvesting. 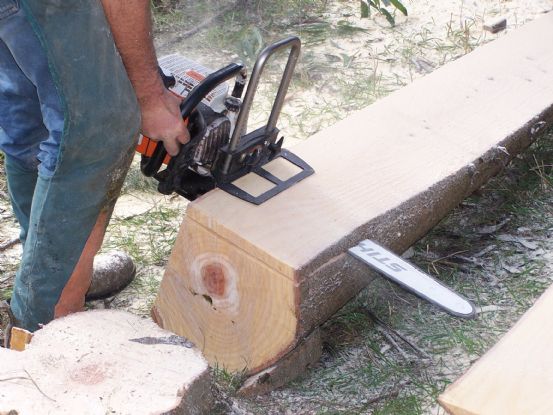