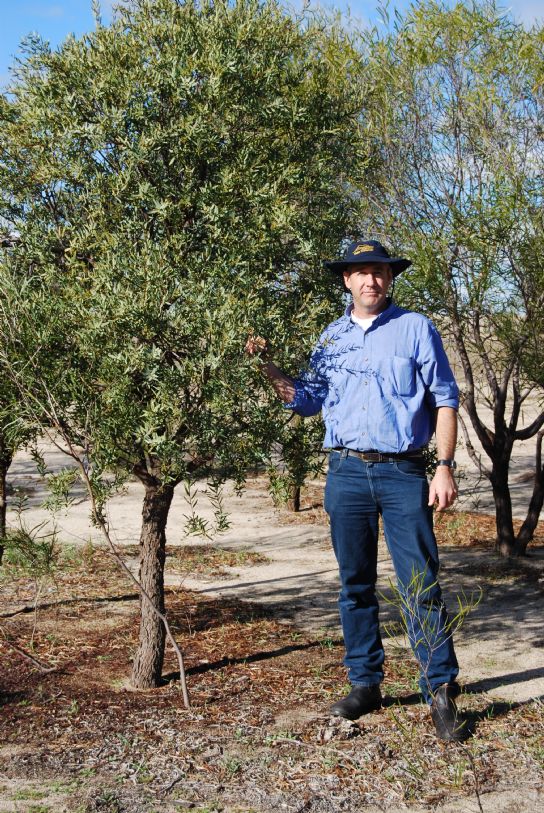 The wheat-sheep belt of Western Australia is the centre of the interest and expertise in Australian Sandalwood. It is here that the Australian Sandalwood Network (http://www.sandalwood.org.au/) was established by a group of landholders keen to explore alternative native tree crops suited to low rainfall areas. They are in close contact with researchers from the WA Forest Products Commission and the University of Western Australia. Other supporting partners include Wheatbelt NRM and AVONGRO, a regional group established to support the development of tree-cropping options for the region.

Together, these groups and organisations share their knowledge through publications and at field days and seminars. I've worked with many of those involved and share their enthusiasm for this unique Australian tree crop. However, there are many challenges facing growers and uncertainty surrounding the productivity and profitability. But eh, isn't that part of the fun of tree growing?

The main consideration when selecting a site for growing Sandalwood is drainage. Soils prone to seasonal waterlogging are unsuitable as are very free draining sands. Whilst well-adapted to low rainfall areas the higher the rainfall the greater the growth rates although there is some concern about the wood quality of Sandalwood growing in areas of more than 750mm.

Sandalwood is a hemiparasite. This means it cannot survive without being planted close to a suitable host species. The current standard practice is to ensure the host plants are well established before sowing the Sandalwood. The native nitrogen-fixing trees, especially the long-lived wattles (Acaciaspecies), appear to work well. Researchers have found a significant difference between the wattle species in the establishment and growth of Sandalwood but recommend growers include a range of species as some wattles are relatively short lived. Casuarinas are also nitrogen fixing and although slower to establish are worth including in a mixed plantation.

The hosts can be planted, direct sown or even naturally growing on the site. Whilst it is possible to plant the host trees as seedlings and sow the Sandalwood seeds in the same year it may be worth ensuring that the hosts are well established before risking limited or value seed. For a plantation, around 1000 host plants per hectare are suggested. Allowing for easy access this can be achieved by planted trees every 2m along prepared rows 4m apart. Many farms have natural regeneration of wattles and it should be possible to enrich these areas with Sandalwood. However, it may be necessary to thin the regrowth a little to reduce shading and moisture competition. 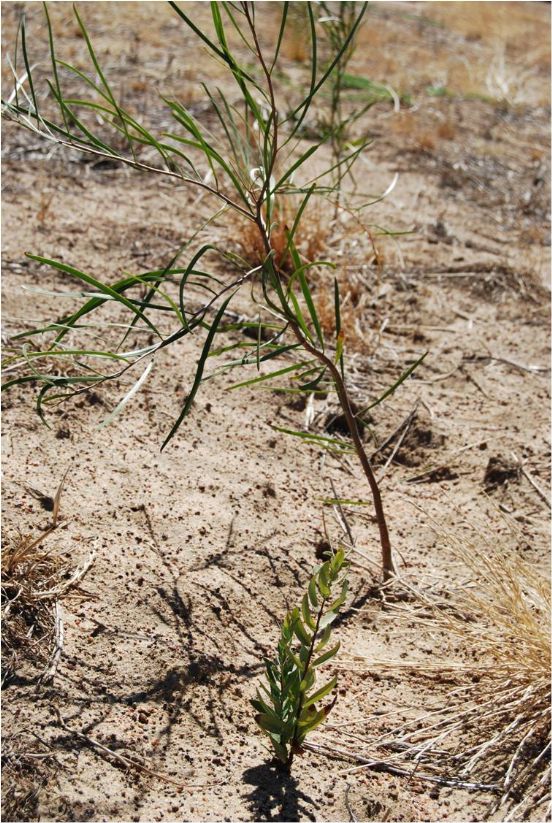 Some farmers are beginning to produce seed from their own trees and these are available for sale (see: http://www.sandalwood.org.au/). Sandalwood seed is large with a dense store of carbohydrates that drive the rapid root growth required as the seedling searches for the roots of a host. If the tree cannot fix onto a host within one or two years it will die. With the host plants already established the simplest and most cost-effective method of establishing the sandalwood is to direct sow treated seed close to the host.

Researchers suggest aiming for about 500 Sandalwood trees per hectare. If the host is a one-year-old wattle the seed should be planted within a metre. For more established trees it may be worth exploring how far the roots of the hosts extend before sowing the seeds. Planting the Sandalwood on the north side might be a way of reducing the shading.

To stimulate Sandalwood germination researchers have developed a simple method of mimicking the natural ecology of the species. The method involves soaking the seed in water for up to 24 hours then drying them in full sunlight on a hot day. As the shells shrink hairline cracks will develop in the hard see coat allowing water to enter. The seed can then be directly sown into the paddock in anticipation of rain. For small scale plantings it may be worth germinating the seed in boxes of potting mix. Just as the root emerges the seed can be carefully lifted and planted directly out into the paddock. This way you know that you have planted a viable seed at every spot. 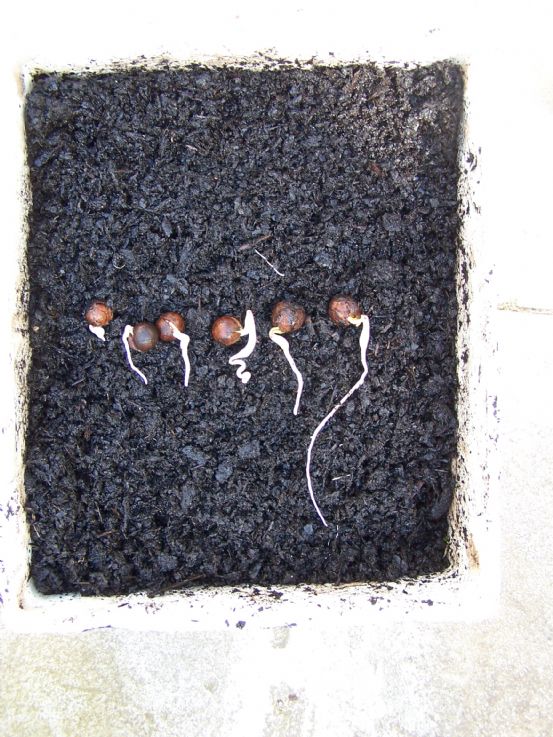 It is important to control competition from weeds and grasses during the establishment period. Using a 'knock-down' herbicide, spray around the spot where the seed was planted before the shoot emerges from the soil. Alternatively, use a guard to protect the emerging seedling and the host. Do not use residual herbicides as these may affect germination. The seedling will need protection from rabbits, kangaroos, locusts and stock.

Sandalwood timber is not milled so the form of the tree is less important than for other valuable timbers. However, because the larger logs have a greater the proportion of heartwood the commercial value of the tree is related to the diameter of the trunk. This means that a tree with a single stem will be more valuable than one with a shrubby form of the same weight. Single stems can be encouraged by careful corrective pruning although I am not suggesting removing large branches.

If the hosts grow well they can dominate the site and suppress the growth of the Sandalwood. Some wattles can recover from heavy pruning which allows you to manipulate of the canopies of the hosts so as to avoid shading of the Sandalwood without affecting the survival of the host. If there are plenty of alternative hosts, including natural regeneration, any dominating host trees could be culled. There is ongoing research into managing mixed species plantations that will be important in guiding growers.

The rainfall in the Western Australian wheatbelt ranges from between 300 and 600mm with a pronounced summer drought. Early growth rates in this environment suggest that after 20 years the sandalwood trees might reach a commercial diameter of 12 - 15 cm although it might be worth waiting longer as the trees will be increasing in value all the time. Harvesting involves lifting the whole tree out of the ground so that the roots can also be sold as well. This is obviously easier in sandy soils. The bark and dirt is blasted off using high pressure hoses.

It is anticipated that a plantation might yield as much as 4 tonnes of commercial timber per hectare. However, as I highlighted in the last article, Sandalwood produced from relatively young trees is expected to be worth less than sandalwood harvested from natural or very old stands. Nonetheless, at around $5,500 per tonne it may just be worth waiting for!

Well before the timber harvest the trees will be producing commercial quantities of valuable seed. A five-year-old tree can produce more than 0.5 kilograms of seed. Current seed prices (around $50/kilogram) reflect the demand for planting stock and the lack of supply. It is likely that the price will fall to a point generally supported by the food value of the nuts. This might be in the order of $7-$10 per kilogram depending on how the demand for this new bush-food develops.

With increasing interest in the growing of high value native timbers and the ecological advantages of mixed-species plantations Sandalwood is a option worth considering. 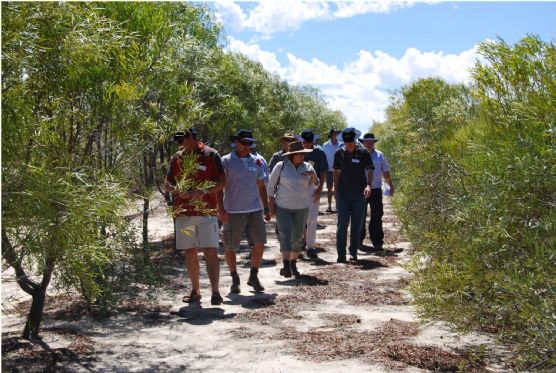